This article is part of a series on climate and sustainability in partnership with 1014.

During the 80s a flurry of mechanical sounds and industrial decline inspired underground electronic music at a very defining moment in industrial cities, which nurtured future generations of creatives. Years later cities like Detroit are still paving the way to unplug the misfortunes of deindustralisation. But that grown-up creative generation is fueling a desire for an urban renewal towards sustainability.

Turin in Italy finds itself at this pivotal moment. With a significant creative industry – around 1,000 creative companies – the economic recovery and  cultural dynamism of the city is still slow. Luca Ballarini owns a design studio in the city and in 2013 it was commissioned to work on the image of a strategic plan in an effort by the administration to revive Turin.

However, during the project Ballarini fell out with the city administration over the fact that the city was more concerned with the outside image rather than changing the real picture from the inside. He started organizing gatherings with other creatives to collect ideas to unlock the potential of their city.

In 2014 those informal meetings grew into the independent cultural association Torino Stratosferica, a think tank to take on urban renewal and planning initiatives to foster sustainability and reimagine a city that once was capable of shining a light on a synthesised pop music scene little heard of.

In June last year they created the Precollinear Park and turned an abandoned tramway into a green space of the civic commons open to everybody. The Turin city council temporarily handed this strip of land to Torino Stratosferica’s team. Already a great number of green spaces spread throughout Turin’s urban landscape, amounting to 12.6m2 of green space per inhabitant, well above the minimum of 9m2 recommended by the WHO.

Yet the pandemic has shown us we never can have enough. In fact, during the quarantine, when people were not allowed in parks, they could walk at Precollinear Park because technically “this place isn’t a real park”. 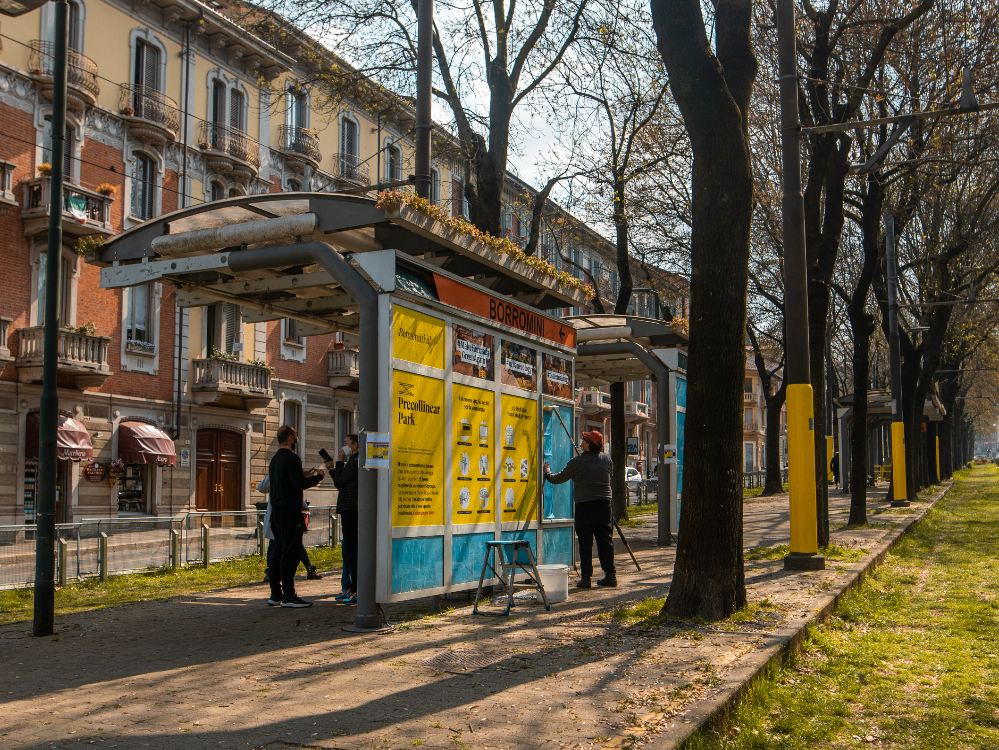 This ‘pseudo-public’ space opens the possibility to explore a healthy balance between the freedom and responsibility granted to citizens to take care of this public space. More than 700 citizens from all over Turin participated in the meetings for the project’s launch.

‘We are learning by doing. Our aim is to encourage nearby residents to pay attention to what is happening in front of their doors, notice their surroundings and thus feel the ownership of the park’, explains Ballarini.

This urban temporary park is a place for continuous transformation, where residents are starting to appreciate how this urban green area is full of potential and can bring multiple benefits: cleaner air, biodiversity of the city, reducing the impact of heatwaves, promoting walking and cycling, and also being used for a multitude of simultaneous purposes to improve the cultural and social conditions of the city’s environment.

The future of the park. Or the park of the future?

Precollinear Park, right in the middle of six car lanes, stretches for 700-metres along one of six bridges over the river Po, the spacious bridge Regina Margherita, where visitors can enjoy the breeze and the spectacular views of the Alps, the Basilica di Superga, the hills and a striking sunset over the river.

From ponte Regina Margherita, Torinostratosferica’s team have placed a reconditioned shipping container on the far end of the bridge which serves as a warehouse, an info booth and a bar during open-air events. Also the platform roof of the ex tram terminus is the ideal venue for public gatherings.

Right now many volunteers, around 40 percent from the neighbourhood, take care of the park, clean, paint and plant flowers. At the basis of the intervention is the care of the greenery. Every day a park ranger takes care of cutting the grass, keeping the plants clean and watered.

We know that perception of the city doesn’t change with a small park. But it is a beautiful metaphor, at the core of Torino Stratosferica, that cities are mental weapons that citizens could change at their own desire, says Ballarini.

He and his team are optimistic that an urban renewal towards sustainability will evolve. After the urban decay resulting in abandonment, shrinking population, unemployment and disinvestment in culture, the challenge is to provide quality public space for its citizens measured by the increasing interest of the nearing community that no longer sees it as an infrastructure leftover but a free and accessible green space. Its maintenance and management depends on the collective action to ensure it reaches its full potential.

The park, as Ballarini claims, helps them take things to the extreme and show the muscles of how bold interventions at public space can help address future urban challenges.

An innovative narrative for Turin is changing the mechanics

This month they launched open-air classes with students from middle and high schools engaging in a program on the importance of urban ecology, allowing the young Torinese to take part in the placemaking process through gardening workshops, and build DIY objects and street furniture with their own hands, in a green, safe and multifunctional environment.

At the Precollinear Park sustainability meets creativity in an urban regeneration project determined to collect grounded evidence of the capacity of quality in green spaces to recreate themselves and revive the city’s development.

This High-Line-style walk and cultural spot is at the crossroads between neighbourhood-based civic engagement and citywide visionary proposals.

Even coming from a much deeper crisis, the fathers of techno music in Detroit understood, obsessed with the future, that the industry had to die to make way for technology and produced post-industrialist sounds. In Turin creatives are advancing a transition away from deindustrialism to sustainability. Building a sustainable city is a state of mind, you not only breathe the air, but you have to feel the air. The spread of a culture that revives the creative DNA of the city will project Turin into a sustainable future.