There is the story of a mural that appeared in Clacton-on-Sea, in the UK.  It shows a group of pigeons wielding anti-immigration slogans such as “Go Back to Africa” and they point towards a more exotic bird. It was a Banksy original but many anxious citizens weren’t so enthusiastic about its satirical intent. They complained to the council that the mural was offensive and racist. The City administration succumbed to people’s requests and banned the piece for not being appropriate. In cities, authorities always have had a controversial relationship with graffiti.

In recent years they have been less reluctant to street art to the point that last week urban planners were joking as murals weren’t the panacea to revive neighbourhoods. Although it is certain that we can’t leave everything up to street art, graffiti is indeed an act of resistance to provoke and tigger off some meaningful reactions in communities. Take a closer look at some art pieces and you will start seeing things differently.

If street art weren’t so powerful, why would city authorities have tried to stop activist and Yemeni street artist Haifa Subay from painting on the streets of a city, a country immersed in an almost 7 years war? But it is the problems behind the messages that murals express that disturbs the people in charge. 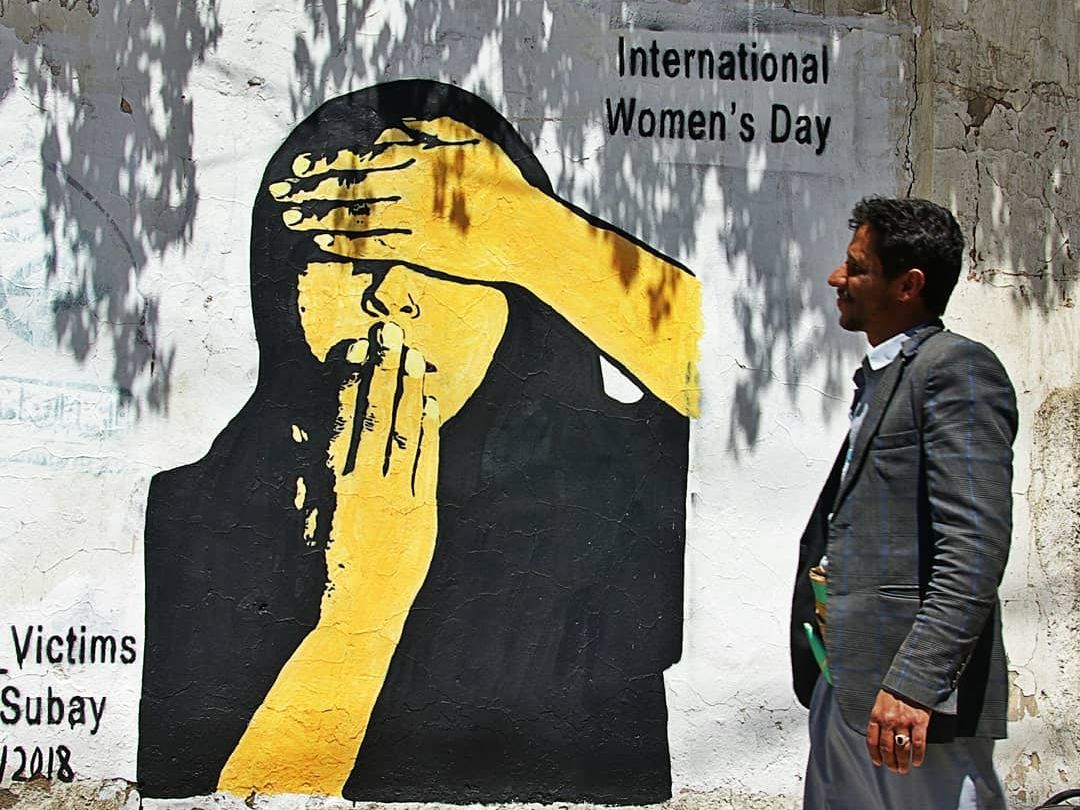 Since last December Haifa Subay is spraying the walls of the city of Aden with what it means to be a woman during wartime through her real experience of pregnancy, her resilience and the feeling of joy that her child will bring hope and peace. One of her murals called “We will survive together” is part of the new campaign “Women and War”.

The importance of women in peace processes

‘Pain and hope have two different meanings, but they are associated with every experience of motherhood that a woman goes through. In the face of the ongoing conflict and its impact on women and children, women bring about an invisible engagement for peace. Women can play a bigger role in formal peace talks. This proxy war has been created by men struggling to exert their influence in Yemen. We call on the authorities to consider the influence of women in the peace process’, claims Subay.

According to the Women’s International League for Peace and Freedom (WILPF), women-led civil society groups in Yemen, including the Peace Track Initiative, have repeatedly called for the inclusion of women in the peace process, to at least 50%. In Yemen women are also involved in a cultural fight to break social barriers. So far the peace process has excluded women, although they suffer the consequences of war the most.

Feminist approaches are required. For example, the Center for Feminist Foreign Policy organization takes a step outside the black box approach of traditional foreign policy thinking and its focus on military force, violence, and domination by offering an alternate and intersectional rethinking of security from the viewpoint of the most vulnerable.

In August 2017 Subay started drawing murals around the city of Sanaa, Yemen’s capital, about the devastating effects of war in its citizens: famine, poverty, homelessness, school destruction, murder,  civilian casualties from landmines, cholera and domestic violence against women and children.

Her moving murals lead her to collaborate with the Singapore Art Museum and the National Gallery Singapore for about a year and a half. The work was shown at a mural exhibition in the Singapore Biennale called ‘War and Humans’ in 2019, revealing to the outside world the horror of war in her country.

All I thought was that people in my city could see what is happening in Yemen because we were all suffering in silence, explains Subay.

In Sanaa city authorities tried to stop her from painting on the streets, took her material and threatened jail. But Subay has continued with what she believed is worthy of life.

‘I confronted them by stating that I am a victim of this war as well and wondered why they should be angry about it. We are talking here about a pressing humanitarian situation. But this is exactly the point. City authorities were afraid that people would ask and understand what is in the wall. Some citizens don’t get salaries and can’t buy any food; there is no electricity and some have to stand for hours waiting for water or humanitarian help. It wasn’t that good in Yemen before the war but the basic services were available. We don’t trust governments, either in the South or Northern cities. They have their benefits to continue with this war’.

For safety reasons Subay left Sanaa and moved to the southern Yemeni city of Aden where Yemen’s internationally recognized government is based. As a Northern woman, it is very difficult to get permission to paint there but then she managed to start with “Women and War”.

‘Street art touches directly people on the streets, it is democratic because it is available for everyone without any kind of censure. It is not TV, you can touch the experience. People can also react with you right away and speak out about their feelings. People like to join me while I am drawing. They feel powerful to be part of the experience’.

Women who transform the world

Art can be a veiled act of defiance for peace. In a speech by Toni Morrison at the ArtTable award once, she told an anecdote of a writer reporting on the killing that government gangs were doing on dissenters, and ordinary and innocent people, at their leisure, during the years of dictatorship in Haiti: ‘No one was allowed to retrieve the dead lying on the streets or in doorways. You can imagine the horror, the devastation, the trauma this practice had on the citizens. One day, a local teacher gathered some people in a neighbourhood to join him in a garage and put on a play. Each night they repeated the same performance. When they were observed by a gang member, the killer only saw some harmless people engaged in some harmless theatrics. But the play they were performing was Antigone, that ancient Greek tragedy about the moral and fatal consequences of dishonoring the unburied dead. Make no mistake, this young writer said: art is fierce’.

And women practicing art are a threat to regimes because of the soft power it entails. To stay in Ancient Greece, it is worth mentioning a playwright by Aristophanes called Lysistrata that was an anti-war comedy. The female characters in the play, led by the eponymous Lysistrata, withhold sex from their husbands as part of their strategy to secure peace and end the Peloponnesian War.

In 2003 Leymah Gbowee and the Women of Liberia Mass Action for Peace organized nonviolence protests that included a sex strike. Their non-violent actions led to peace in Liberia after a 14‑year civil war. In 2011 she was awarded the Nobel Peace Prize “for her non-violent struggle for the safety of women and for women’s rights to full participation in peace-building work” in her country.

Sending out a message towards peace

Despite the repeated calls for a ceasefire and peace by the Yemeni people and civil society groups, this devastating conflict has been ongoing now for almost 7 years destroying people’s lives. International organizations have acknowledged the importance to engage with civil society groups and the inclusion of women in the political process but without success. Subay’s art is a call to other women in the world, who could bear direct and indirect influence in this devastating conflict, for instance, stopping arms transfers that also caused violence against women and girls in Yemen, including sexual and gender-based violence.

Subay is a passionate voice who started drawing when she was a child. In her seventh month of pregnancy she could face the danger of premature labor, the lack of medicines and the inefficiency of sanitation facilities. But she is still putting her own life on the line to continue painting, even if people are disturbed by what they see, and inspire a culture of social change in defiance war.

‘Through my art I am trying to transmit a positive message to other women to wage the war with non-violent alternatives. Hopefully street art can contribute to see the world in a different way to end this pointless war. We should not surrender’.