In Munich winter sunny spots in public spaces can be counted on one hand. The furore caused by the temporary removal of one of them and its replacement by students reveals the importance of sunlight for people in cities. Unfortunately urban planning often underestimates it.

It was this year in February when regular visitors, who used to sit on the sunny steps facade of the sculpture museum in Munich, wake up to find out they were gone. Renovation works of this neoclassical building took away their daily sunbath ritual. A high wooden wall has enclosed the entrance to the Glyptothek, as they called this museum in Munich, and with it access to the popular sunny steps.

Actually I have been to this place many times. The heat absorbed by the natural stone steps during the day just felt right to sit on. People of all ages come here and sit on the stone steps of the Glyptothek – their noses sunk in books or stretched towards the sun – which somehow always felt like shining on Königsplatz.

‘We were just totally perplexed. Can we not sit on our favourite sunny spot for a year and a half?’ explained Maria Schlüter and Nick Förster, two architecture students at the TU University in Munich.

So we immediately went to a café in the university building and started sketching an idea on how to build a temporary spot with sunlight at the same square.

They emailed their idea to different institutions involved in the renovation works of the Glyptothek; from the management of the museum to the local municipal authorities. By the summer they got the support and permission of the city of Munich to start building a replica of the steps.

Maria and Nick also found sponsors for their project. Around a dozen businesses – from paint shops to screw supplies – have made in-kind donations. A carpenter has helped the students cutting the boards and the Kulturreferat (Department for Culture) for the city of Munich has spent 5,000 euros on material costs.

For three months Maria and Nick together with friends work on the steps replica with their own hands. To get a stone look on the wood, they even painted the steps. 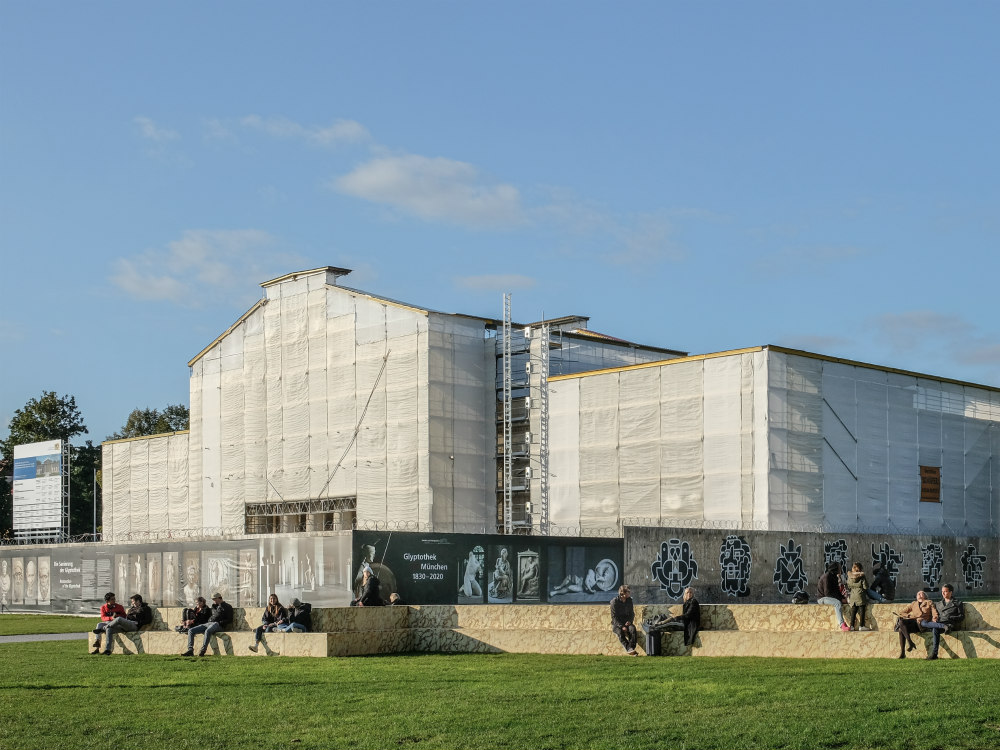 The place to sit in the sunlight came back, so did the people.

The importance of sunlight in cities has been underestimated

The building of skyscrapers, widespread construction of roads and increasing density in our cities have severely limited the amount of sunlight, a primary natural source essential to the health and happiness of urban dwellers.

Ancient civilizations such as the Mayans have strategically built their cities according to the sun, deliberately and astonishingly positioning their buildings to align with the sun’s rising and setting.

Since then cities have changed but humans have remained the same – our natural tendency is still to seek out sunlight. This has a biological explanation. Sunlight is the main source of vitamin D, also called the ‘sunshine vitamin’, which provides lots of health benefits. It makes total sense to build with the sun in mind.

The Right to Light in urban planning

What happens to cities that don’t have so many hours of sun or have high density of tall buildings is that basically sunlight becomes even more precious.

For instance New York City does not generally limit building heights, but instead controls bulk and density by what’s called the floor area ratio (FAR). This means that a residential developer can build nine times the square feet of the lot area in an R-9 district. However, luxury developers use a loophole in the law to build soaring towers.

Actually the topic of the importance of sunlight in cities came to my attention by watching one of the Urbanist’ videos by the New Yorker Ariel Viera, where he explained the rights to build high buildings in Manhattan.

These rights not only seek to guarantee skyline views to the apartment’s owners but also guarantee access to the essential natural source of sunlight.

The problem, though, is that the increasing construction of skyscrapers is threatening the access to sunlight for many others in the city. For example, a rise in the number of long-mile shadows over Central Park provoked by those buildings.

In New York there is a non-profit advocacy organization called The Municipal Art Society of New York (MAS NYC). MAS mobilizes diverse allies to focus on issues that affect the city from sidewalk to skyline and also advocates the right to light.

At the 10th annual MAS Summit for New York City held on October 25 this year, under the theme Fight for Light, the Summit explored the economic, social, environmental and public health impacts of light and air in urban neighbourhoods.

As New York City has grown denser and darker, their conclusions at the Summit were that ‘our public realm is inseparable from the health of our city and its residents. We must continue to steward and enhance access to light on our sidewalks and in our parks, plazas, gardens, and open spaces.’

Back to Europe, in England, they have a law called Right to Light, which essentially forbids building any obstruction to a window that has been receiving daylight for the last 20 years or so.

For instance, in London a Planning Advice Note issued by The City of London in July 2017 gives guidelines and best practice for assessing sunlight in the city. It states that ‘providing and safeguarding sunlight to open spaces should be incorporated into design proposals at the earliest stage and the impact on sunlight should be assessed as part of the development planning process’.

That’s just how the importance of sunlight in cities factors into urban planning.

Every individual in a city feels a need for sunlight. We, as urban dwellers, know exactly where to go to look for the sun. Every one of us has a favourite spot in the city.

Depriving people of the importance of sunlight in cities threatens to shadow an equal right to all citizens. Access to sunny spots is just essential to humans; it makes them healthier.

By the time I wrote this article, the students were dismantling the steps. In Spring they will be back until the renovation works finished in October 2020. By then Maria Schlüter and Nick Förster will have already their Master’s degrees in their pockets.

The future of Munich looks bright if students are ready to build with the sun in mind.