In times of the Coronavirus crisis, food security in cities requires proper attention again. Governments have repeatedly assured citizens that food supply chains are not disrupted, however people has rushed to supermarkets to stock up on food. One of the side effects of globalised food chains is that people feel disconnected to ‘food corridors’ in their cities.

In the last years regional food policies are trying to strengthen the local rural and urban connection and creating sustainable food systems. Locally produced food requires less transportation and refrigeration, it can supply nearby markets with fresher and more nutritious products.

In case of a crisis like water scarcity or unrest, though, producing food directly in the city guarantees self-reliant supply building the case for urban agriculture. Cairo, a city supplied by the food basket of their nearby Nile Delta, is probably one of the best cities to make the point. Even there, a resilient food system and food security matter.

The urban activists behind ‘Urban Greens’

Abdallah Tawfic and Yehia El Masry co-founded Urban Greens in late 2018 out of this conviction. They strongly believe in the broader benefits of urban agriculture for small spaces and its specific meaning and ample benefits which it could bring for Cairo, especially among low-income residents. It guarantees consumers access to fresh produce and improves lifestyles. Ultimately it can change lives by building a resilient city to face future challenges.

Tawfic is an architect but he sees himself more as an environmentalist and urban farmer. He graduated from Cairo University in the Department of Architecture. After working seven years in architectural consultancy in several national and multinational companies, he moved to Germany for 3 years to attend a master degree program named Resource Efficiency in Architecture and Planning (REAP) from HafenCity University in Hamburg. His Master thesis, entitled “Retrofitting Green Roofs to the Urban Morphology of Informal Settlements” was awarded the “HOLCIM student prize for Sustainability” for the academic year 2015-2016.

Upon receiving his master degree, Tawfic had the opportunity to apply what he has learned and move from theory to practice by managing an Urban Agriculture project funded by the German GIZ (Gesellschaft für Internationale Zusammenarbeit) at the American University in Cairo for 2 years, as well as leading several research experiments on campus on different techniques of soilless agriculture techniques like hydroponics and aquaponics.

During this time, he met co-founder Yehia El Masry at the American University in Cairo. El Masry is currently working with the UN Industrial Development Organization in Egypt. ‘Since we share the same passion, we thought let’s take this to another level and try to disseminate the idea and spread it among the people of Cairo’ explains Tawfic.

In the context of Egypt, hydroponics are very beneficial. It is a cross-cutting technique that intersects with food security, environmental sustainability and even poverty alleviation.

With the high number of flat rooftops in Cairo, the potential to build urban gardens on underutilized rooftops and use this technique is immense.

Population growth and the spread of informal settlements in Cairo

Cairo is the second largest city in Africa with over 20 million inhabitants. Heavy on traffic, the city is spreading even further East and West into the desert through building satellite cities to decrease the pressure on the city centre. Unfortunately, a lot of urban expansion is also happening at the Nile Delta leading to lots of encroachments on valuable fertile land, which is eventually affecting agriculture production.

‘This sad transformation is already happening. In the past, agriculture lands used to be owned by fewer people, however through time those lands were inherited by more people and fragmented into smaller parcels. The land is so small that it is becoming uneconomically liable for people to practice agriculture. In fact, it is better for the owners to either directly sell the land or build a house and rent/sell its apartments, compared to agriculture activity which is not profitable anymore’ explains Tawfic.

The second big issue that Cairo is facing is the scarcity of water. 97 % of Egypt’s natural water sources comes from the Nile river but the problem is that 80% of the water goes to irrigating agricultural land, where farmers use traditional methods like flood irrigation which is considered a water inefficient method.

Soon water will not keep flowing uncontrollably in Egypt. Ethiopia is constructing a hydropower project on the Blue Nile and Egypt fears that once the Grand Ethiopian Renaissance Dam is completed water resources will decline.

This problem is compounded by an environmental issue in the Mediterranean area and other coastal cities in the Middle East, where rising sea levels have increased the salinity of underground water and the soil.  Also mass dumping of industrial waste in irrigation canals has polluted waterways.

Unsustainable practices and a thirsty city with erratic rainfall threaten future water resources and correspondingly food security in Cairo. Agriculture productivity in the northern Delta is declining but population is rapidly increasing.

We need new smart and sustainable approaches to adapt to water scarcity, we are already in a water stressed situation, acknowledges Tawfic.

‘We try to explain to our people that hydroponics has been proved to be a successful technique for growing food inside our cities. It allows us to save up to 95% of water, it does not require fertile land and the production rate is much higher (5-10 times more compared to land agriculture), the produce is also of a high quality and is usually cleaner and pesticide free. This is why we stress to use this technique’.

The benefits of urban agriculture and green rooftops in Cairo

In general, vegetables have a short production cycle; some can be harvested within 60 days of planting, thus they are well suited for urban farming. Garden plots can be up to 15 times more productive than rural holdings. An area of just one square metre can provide 20 kg of food a year.

Beyond a resilient food system for communities to ensure access and food security in households, urban agriculture can provide employment and incomes for poor women and other disadvantaged groups. They can sell overproduction directly through street food stands and market stalls. More income goes to them instead of middlemen.

Other benefits of the green roofs are the improvement of the city’s air quality and the health and wellbeing of the citizens while fostering social interaction among neighbours in communities. Green roofs are also open green spaces that can be used for social gatherings.

According to the study “ Review of green spaces provision approaches in Cairo, Egypt” by Merhem Kelleg Cairo’s share per capita of green spaces -1.7 m2/capita- is much lower than the international norms and standards, even when compared to more arid cities like Dubai.

WHO recommendations of 9 m2/capita for a livable environment and 50 m2 for ideal living conditions. This 1.7 m2/capita is not evenly distributed among Cairo’s population. More than half of the city’s population only have 0.5 m2/capita; 70% of the population experience less than the city average of 1.7 m2/capita. In other words, the little green and open space there is, is concentrated in just a few neighborhoods.

Much of the green space in Cairo that is provided -by municipal government or private entrepreneurs- is provided as a private amenity, enclosed and charged for either by membership fee or entry toll.

‘People in Cairo are not used to the concept of shared public spaces, let alone green areas or even parks. We are continuously working on raising awareness inside public and private schools and trying to change this mindset. We want to create a new culture that supports the concept of shared green spaces, starting with semi public rooftops or open yards inside schools, libraries, NGOs and any other easily accessible spaces. We also partner with different entities in the private sector to provide educational workshops for their employees and for their partner NGOs as part of their corporate social responsibility. Communicating such concept with civil society organizations and diverse communities is very important and is where the true change in the mindset will happen’.

In low-income areas, Urban Greens usually works with non-profit organizations and donors to approach communities. They have already done a preassessments for specific areas that has been concluded “ in need for such intervention”. In most of the cases; a technical checklist (insulated roof, water availability, technical infrastructure..etc) is used to make sure those spaces are ready to receive Urban Agriculture infrastructure. This technical checklist is complimented by a social checklist, to ensure the sustainability of the implemented garden and make sure that people will take good care of what have been provided.

When we explain to residents of a building in informal areas that the rooftop should be shared by all neighbours and we encourage residents to remove all scraps from the roof, some people resist. In other cases, they are open to it.

Cultural issues are here important to consider. ‘If you ask a family living on the first floor to visit the roof above the 8th floors frequently, they would most probably resist because they have a longer way up using the stairs compared to a family living on the top floor below the roof. In houses owned by one family everything is much easier, since the family would be able to internally manage the operations and maintenance of the implemented rooftop garden’.

Since many communities cannot bear the cost of an urban garden, donors usually organize a co-financing programme where residents pay at least 5% of the cost of the garden. This is a way for that particular community to show serious commitment and feel the ownership of the garden.

Our dream is to see fresh, clean, locally grown and water efficient produce being consumed by communities in Cairo. The technology and research currently being utilized are making this dream possible.

Changing mentalities, cultures and mindsets is not an easy task, but Tawfic and El Masry are not preaching in the desert. The  EgyptianMinistry of Environment as well as Cairo Governorate has already launched a campaign endorsing green rooftops and therefore helping to spread the concept in Cairo. 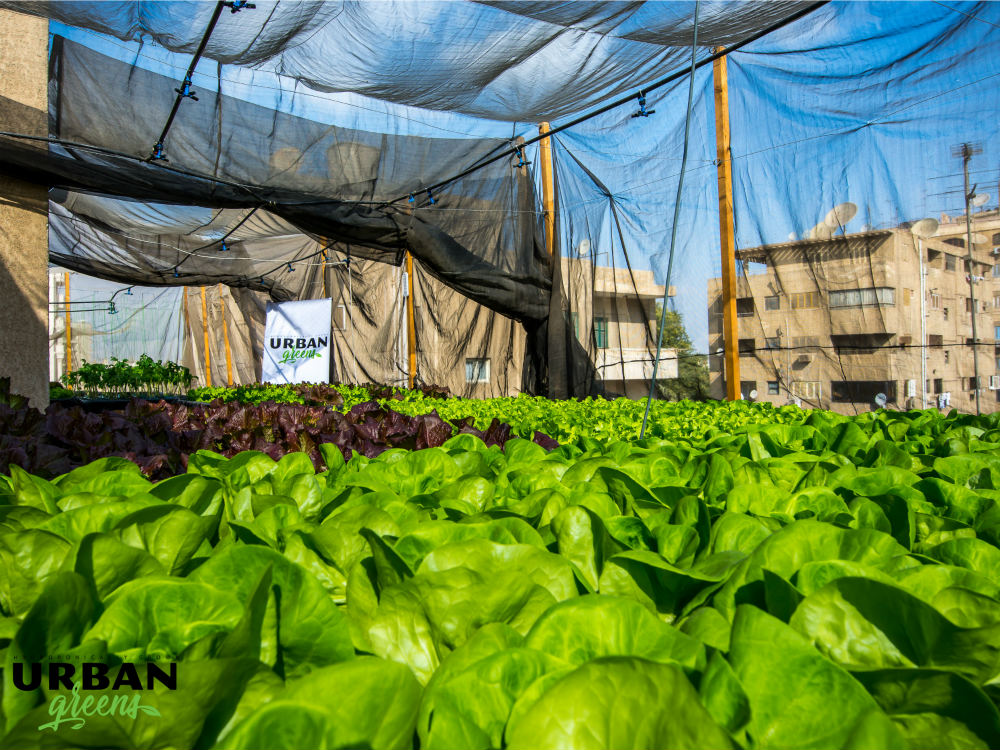 Our cities are facing serious challenges, like water scarcity or rapid urbanization. There could also be other crises like political unrest or a pandemic. That means that locally sourced sustainable approaches like small-scale food and urban agriculture activities are key in terms of food security.

According to the Food for cities programme of the FAO, urban food security necessitates a reliable year-round supply. The challenge of feeding cities consists in facilitating access to food by consumers. Tawfic believes hydroponics is making this possible in Cairo, making urban agriculture a great opportunity for self-organized food production anywhere in the city, starting from a small balcony in an apartment, to different size rooftop spaces, to bigger vacant lands.

If I think of all those concrete rooftops in Cairo becoming green, a picture of the city from the sky would be mind-blowing.