This article is part of a series on climate and sustainability in partnership with 1014.

Three street trees stand alone on a corner of the Reichstag in Berlin. They are 51 years old, one is an American red oak, assumed to have been planted in the Soviet sector. Not far away, in the former Jewish quarter, a maple tree has reached the age of 86 and a London plane tree is 121 years old, both survivors of the bombing and massive tree felling for heating during the war. If trees could ever speak in cities!

It’s never been easy to be a street tree in an urban environment but unusually warm summers and irregular rain patterns due to climate change are becoming a real struggle for these oaks and maples. Nowadays, in Berlin alone, over 1,000 street trees on average disappear each year. Mayors around the world are urging to increase greenery to offset carbon emissions but the correct aftercare of existing street trees would take off some of the burden. Yet watering is less sexy than announcing new planting.

According to the BUND Baum Report issued in February 2021, Berlin continues to lose street trees every year. The total street tree population has decreased from 439,971 to 431,101 trees between the years 2012 to 2019. That is a net loss of 8,870 trees. Every new tree planted in Berlin has to replace 2.4 felled trees.

A sharp increase in tree felling from 2017 onwards – well above the average of 4,703 felled trees – is striking though. In autumn 2017, the storm Xavier drew a swath of devastation through Europe and in 2018  Berlin was the sunniest city in Germany with 2,308 hours of sun. Since then there has been a persistent drought.

The consequences of climate change, especially the dry and hot summers, are putting a strain on Berlin’s ecosystem and trapping cities in a vicious circle. Mature trees efficiently store carbon and produce a cooling effect which helps to reduce urban heat islands and hot spots in cities. However, drought and arid weather combined with a lack of proper aftercare make it difficult to preserve street trees, which are essential to moderate climate change.

Our street trees are drying up and suffering long-term damage. In recent years, more and more trees have had to be felled and their lifespan is decreasing. While there has been a call for Berliners to help watering trees, it has been largely uncoordinated. Our platform is determined to coordinate watering efforts through citizen participation and help save our green environment, states the team behind the project Gieß den Kiez.

Located in a building at the former Berlin-Tempelhof Airport, the team of Gieß den Kiez (translated in English, Water the neighbourhood) was working on new ideas at the CityLAB to make sense of Berlin’s built environment in the hottest summer in Germany ever recorded. The result is an amazing display of over 750,000 street trees in Berlin visualized on an interactive map with information such as type, age and water requirements. The platform invites all Berliners to water their endangered tree population. They can find out the water requirements of trees in the neighbourhood, create a profile, adopt trees and mark them as “watered” within the application so that water requirements are adjusted accordingly. 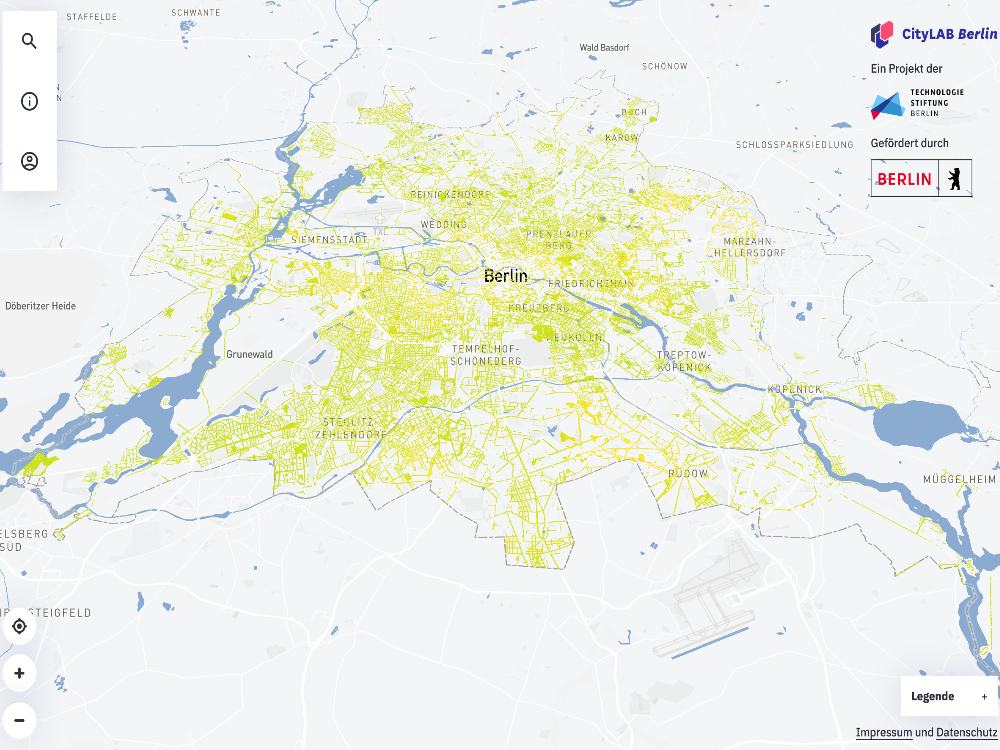 In addition, it is possible to show how much rainwater each tree has received in the last 30 days and whether the tree has already been watered during that time. Water requirements are also adjusted depending on the trees’ age and aftercare by the local authorities. The platform contains a lot of useful information on correct irrigation and the location of Berlin’s handle pumps to avoid carrying water and to support the use of greywater.

All thanks to the intermingling of data from sources like the German Weather Service, water pumps from Open Street Map and Geoportal Berlin / street trees census provided by the city. Against the odds of data protection in the German context due to historical reasons, the CityLAB is involving city staff and ordinary people in open data and scientific research to provide more transparency of how the daily urban lives of Berliners can impact the ecosystem. This innovation lab is a project of the Technologiestiftung Berlin and funded by the Berlin Senate Chancellery.

With the application of Gieß den Kiez its creators not only want to optimize the coordination of tree watering but also bring people together and enable knowledge transfer between all citizens engaged with trees. Some environmental organizations and offices are already regularly watering their nearby trees. These trees are displayed with a caretaker label to show that no extra care is needed. A public Slack channel is open to exchange ideas with other tree friends and give feedback on the app becoming part of a community concerned with one of our most valuable green assets.

‘Despite all the concerns about data protection it turned out that people deal with data very constructively. The democratization of open data is a crucial pillar to digitize our city’s infrastructure and its relationship towards citizens to embrace sustainability. Trees are the perfect example because people feel passionate about them. Thanks to Gieß den Kiez people can easily engage with our green infrastructure to improve the lives of all Berliners,’ explains Frauke Nippel, spokeswoman for CityLAB.

In line with this philosophy Gieß den Kiez is an open source application that other cities with available open data of street trees can implement without copyright. For instance, in New York City the tree mortality rate remains high; 6,000 to 7,000 street trees die each year. But it doesn’t have to be this way with coordinated watering and aftercare of street trees. An available census records tree species, diameter and perception of health based on the TreesCount! 2015 conducted by volunteers and staff organized by NYC Parks & Recreation and partner organizations.

In most cities local authorities with tight budgets for watering are hoping for rain despite what a street tree has to endure — from infertile soil to grow to a massive lack of water particularly in the spring and summer months, critical in the first three years of a tree’s life.

According to Berlin’s Senate Department for Environment, Traffic and Climate Protection ‘It is most regrettable that many street trees, which had to be felled in Berlin over the past few years, have not been replaced yet due to financial constraints. For all of us this means a loss of quality of life, even if Berlin, with over 750,000 street trees, is still one of the greenest metropolises in the world.’

Since 2012 the city authorities have been collecting donations in order to keep the Berlin street tree population at a high level. Around 2,000 euros are needed on average so that a street tree can be planted and cared for for the first three years. People can donate to support one in their district and when 500 euros have been reached, the Senate will add the rest from state funds. So far over two million have been donated.

Yet the goal of committing green spaces like streets lined with trees to a significant proportion of built-up city surface – praised by tree experts – is dwarfed if the right aftercare and maintenance of street trees are not prioritized. Unfortunately we will see persistent periods of drought more frequently in the future. Therefore Berlin’s district offices want to focus on watering existing trees, although there is a lack of staff and equipment for a considerable amount of natural infrastructure.

Grassroots initiatives and citizen-led projects like Gieß den Kiez can offer more than a hand to help. For all the attention that politicians try to gather about planting trees, the fact is that trees are politically homeless. People are willing to stand up for them so that they can outlive us and moderate climate change for future generations.