Long before Bristol was ranked last year as the second most progressive city in the UK after Bath, Bristol has already been doing things differently for the last 10 years. Home of the street artist Banksy, whose works entail messages of social protest, the city has developed a progressive mindset translated into well-known initiatives by Bristolians with environment and people at heart. The most remarkable was Bristol Pound – world’s most famous local currency experiment – circulating among independent retailers to empower local businesses and make a new economy work for the planet.

It is now out of circulation but it seems that momentum is building up again for a new payment system called Bristol Pay. While Amazon seeks to push customers to use other payment methods – it announced a stop to accepting Visa credit cards in the UK in a battle over ‘high’ fees, people in Bristol haven’t been as ‘woke’ as ever before. Although the former Bristol Pound managed to reach over 800 businesses in the city, inspiring other towns and cities to develop similar schemes.

With many lessons learnt, the team behind Bristol Pound is using the insights to change how money works and create better feedback loops between economy, equality and sustainability. Many collaborations to share ideas, like researching with The University of Bristol, arose from that moment and brought attention to the topic of local currencies and other payment methods as a tool for change.

Bristol Pay is now in the developing phase and in the process of raising funds to make reality a new non-profit cashless method for both point of sale and online transactions at low transaction costs. This ‘closed-loop’ payment will bring about a much more profound systemic change in a new economy, which respects the planet’s ecosystem and addresses social inequality.

The reason we think we can offer cheaper transaction costs is because there is a general entry with no middle man, without any third parties (like VISA or Mastercard) involved. It will be an instantaneous transaction and a ‘closed loop’, meaning that all users will have an account on the platform, explains Diana Finch, project manager of Bristol Pay.

She joined the Bristol Pound organization in 2018 after Bristol Pound was already operating for six years. At that point the organization was struggling to increase the base and to engage a wider audience. Their program didn’t include big supermarket chains but rather small local businesses, a strategy which was making it very difficult to target low-income customers, explains Finch. It kind of reached a ceiling, thereby disarranging from the idea of promoting an inclusive economy in the community. 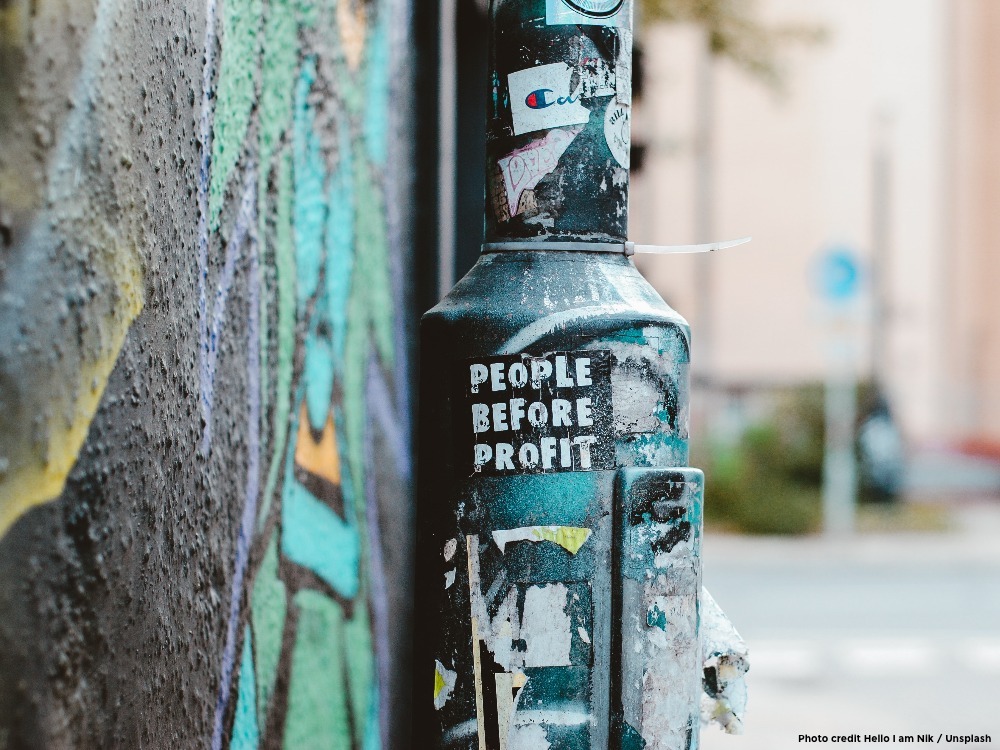 Local businesses started to be disenchanted with the original incentive that the local currency, instead of sterling, would attract more customers to local shops and began to feel the extra administrative effort in bookkeeping for the payments with suppliers. When new payment methods caught up with Bristol Pound’s software, at one-point a cutting-edge technology, it began to lose the magic feather which they had for six years. It was time to pivot the project and repurpose the business.

We examined how much money the city was losing with digital transactions, which charged around 1%. It was around 60 million pounds just in Bristol a year. We thought if we can just get a fifth of that, solely by working with all the big stores, we could be raising 10 million pounds, enough to pay for our running costs and put millions every year into funding voluntary sector and community organisations, says Finch.

So far the team of Bristol Pay has already spoken to a major retailer and faced good acceptance. This payment method will be a unique selling point, the only non-profit low cost payment platform, whose profit is reinvested in purpose-driven organizations across the city. This could be a meaningful incentive for payment-users, thereby gradually upscaling a fifth of Bristol population in 10 years time.

However, even if the payment system would raise funds for local social and environmental projects, Finch believes that to create true change  for a new economy in balance with the planet, another pillar in the project is crucial. As well as holding money in the Bristol Pay account, Bristolians would be able to hold non-financial tokens, which would only give them social reputation, for example, tokens for reducing plastic use or cycling instead of using the car. Finch is very enthusiastic about the amazing things that community groups and people are already doing across the city which create social and environmental value, but it’s hard to visualise the scale of everything going on.

Bristol Pay tokens would count and celebrate all the activity not counted by money, creating a new normal around participation, and encouraging us all to maximise our positive impact. In addition, the token system could help the city to anonymously analyse how well each neighbourhood is doing with, for example, recycling and create a statistical picture of how Bristol’s economy is shifting towards environmental and social sustainability.

Both, the payment and token systems, will be two separate and parallel things on the same platform. The token system intends to emote an intrinsic motivation to do good things instead of being rewarded with financial value. Because, according to Finch, it never works together. Rewarding behaviour is not enough to compete with a financial transaction. Finch refers to the case of  a token scheme in Lahti (Finland) that uses GPS data to determine individual transport modes, and rewards active transport with tokens that can be used on buses.

‘In our economic system we are thinking more of the purchasing power, but no one is counting on the environmental and social costs of things which constitute the real economy. Thus it is important to think about how to reward universal respect among humans and shift people’s thinking’, says Finch. She adds that Bristol Pay is something completely new, exploring innovative approaches on how to create much more positive impact than we ever could with just a local currency.

Bristol was ranked progressive not only because of the amount of vegan restaurants or voter turnout for the Greens, residents really mean it. Last summer the Black Lives Matter movement reached so much momentum in Bristol that it ended up with the statue of the slave trader Edward Colston being dumped in the harbour.

New ways of thinking populate Bristol where an innovative think tank to build a green and fair economy happens to be located there. A New Economy movement is brewing in a city where not everything is about money.

In New York the combination of roads closed off to traffic and the need to reduce tensions on the street has a name, Play Streets. Now it's time to revive them.

‘So Lonely’: Opening Up Eases Loneliness In Cities

‘So lonely’ is a compendium of artistic interventions in public spaces, which intends to listen to how citizens go about loneliness in Munich. All leads to a closing participatory theater to advance action against social isolation.

The initiative Tranquil City maps tranquil spaces together with simplified datasets, such as noise and air pollution, to integrate them into various applications and promote healthier lifestyles in citizens.

How a Motel 6 in Oakland has become a progressive response to a homeless crisis.

This museum’s work supports diversity of thought through art, including a re-thinking of the definition of what a museum is.

Knife grinders withstand the disappearance of traditional workshops in Madrid and Barcelona — but craftsmanship could benefit cities and the planet.