A grassroots initiative has sprung up in Munich. Its goal is to counter anti-Semitism and to, hopefully, mobilize all of German society to take on this lurking evil. To achieve this ambitious goal, J.E.W.S. – Jews Engaged With Society – as its name suggests – fosters encounters between Jews and the rest of German society. 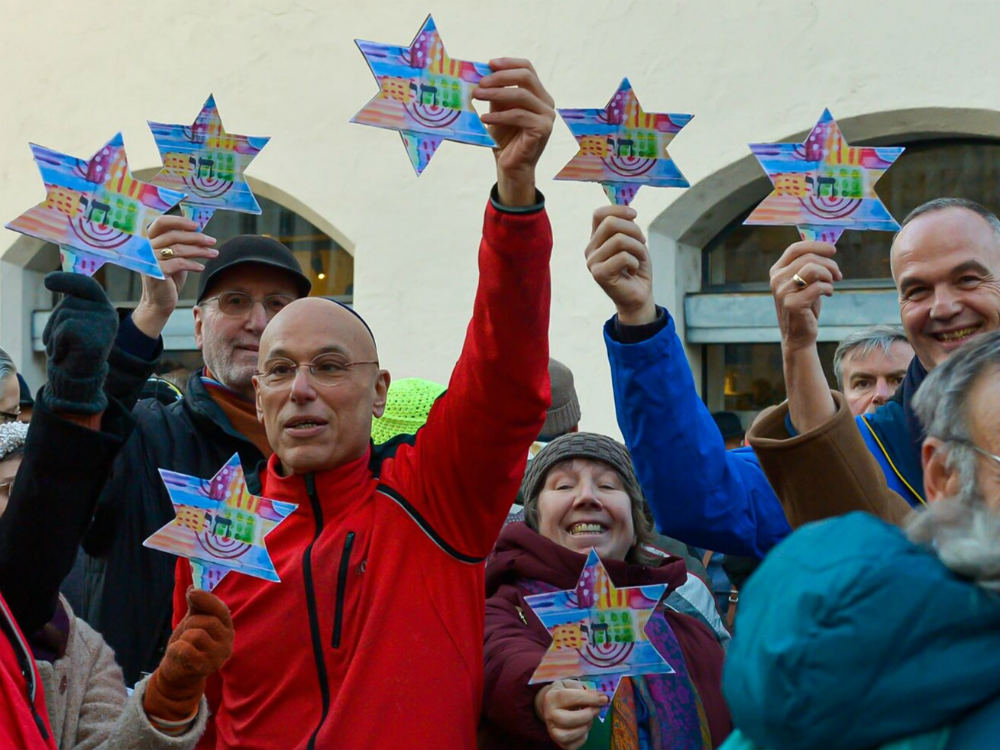 The anniversary came at a time in which many of the world’s Jews wonder whether or not the world has really learned this lesson. A spate of incidents – including the assault on the synagogue in Halle, Germany – have shaken the Jews’ faith in this.

These incidents have yielded a gratifyingly strong counter-response. Demonstrations have been held throughout Germany. At them, Jews and non-Jews have stood together to show their rejection of the ideologies of hate and exclusion. The epicentre of National Socialism, Munich has been a centre of this support for Jewish life in Germany.

Valuable and heartening though these demonstrations are, they do not suffice to address the most pressing concern of Jews: that they are safe in daily life.

That is and has been the objective of Terry Swartzberg for more than seven years. Once a single person ‘experiment’ or ‘reality check’, Terry’s quest to allay Jewish fear and defeat anti-Semitism through direct, easily-comprehensive actions has gradually become a Germany-wide grassroots movement.

According to my fellow Jews, the most dangerous thing a Jew could do in Germany was to put on a kippa and then wear it in public, and to thus let everybody encountering you on the street know that a Jew was in their midst, explains Swartzberg.

His move was accompanied by dire predictions from his fellow Jews: ‘They’ll spit on you!’ ‘They’ll call you a kike!’ ‘They won’t say anything, but they will glare at you!’.

What actually happened has disproved those predictions.

Over the last 7+ years and 2600+ days, Swartzberg has had a series of wonderful, heart-warming experiences in Munich, Berlin, Hamburg and one hundred other cities in Germany and in Europe as a whole.

Born in New York into a Reformed Jewish family, Terry Swartzberg spent part of his childhood in India, where his father, a cultural anthropologist, was conducting field work.

Swartzberg’s years of journalism and public relations were followed by his establishing himself as an ‘ethical campaigner’. His wearing of a kippa and his work for the Stolpersteine project of Holocaust commemoration led him and a number of friends to found J.E.W.S. – Jewish Engaged With Society.

The new association rapidly found its calling. ‘We have created a ‘Munich kippot’ (kippot is the plural of kippa) and have staged events at which people can get them and join us in wearing them in public,’ says Swartzberg.

Swartzberg’s initiatives spirit is of an unprecedented importance in Munich, a city that suffered massive deportations of Jewish to concentration camps.

By navigating online the ‘Biographisches Gedenkbuch der Münchner Juden 1933-1945’ (Jewish Remembrance Archive) published by the city administration archive, one realizes the dimension of the issue in Munich. There are very few streets in downtown Munich in which a Jewish family or other victims did not live.

There are so many wounds still waiting to be healed in this city. Are citizens aware of that load of history translated into personal stories that streets and houses carry on their shoulders in Munich?

Establishing a strong foundation of general knowledge and understanding with the Jewish community is part of that healing process. For Swartzberg personal interaction makes that difference.

Remembrance plays a key role as well. We will not forget.

Swartzberg also devotes much of life to keeping the memory of the victims of the National Socialism in alive in Munich – via his heading the local chapter of the Stolpersteine movement, launched by the artist Gunter Demnig in 1994.

There are now 107 Stolpersteine in Munich – and 75,000 in 1,600 cities in Europe as a whole. Each Stolperstein thus enables passersby to get to know and remember one of the 11 million people killed in the Holocaust.

It adds up to the largest, most inclusive and democratic project of commemoration that the world has ever seen, explains Swartzberg.

Each Stolperstein (‘stumbling block’) commemorates a victim of the Shoah – Jew, Sinti or Roma, homosexual, persons persecuted for religious or political views or due to supposed disability (‘euthanasia’).

The stones are placed in the sidewalk in front of the building in which the victim lived before being dragged off by the Nazis to be murdered. They are commissioned by persons who have dedicated themselves to commemorating their family members, friends, neighbours.

The Stolpersteine thus constitute ‘the palpable atlas of Jewish life and suffering’ – in the words of Galit Noga-Bonai, professor of religious art at Jerusalem’s Hebrew University.

Last summer I was walking closed to the main building of the Munich University when I saw a group of students with different faiths have come together exposing themselves on public space. They were enticing passersby with free hummus and ice cream to start an open conversation and answer questions about their faiths.

The students’ intention was to explain cultural differences but at the same time they were sharing a lot of common interests. Religion was just the starting point. 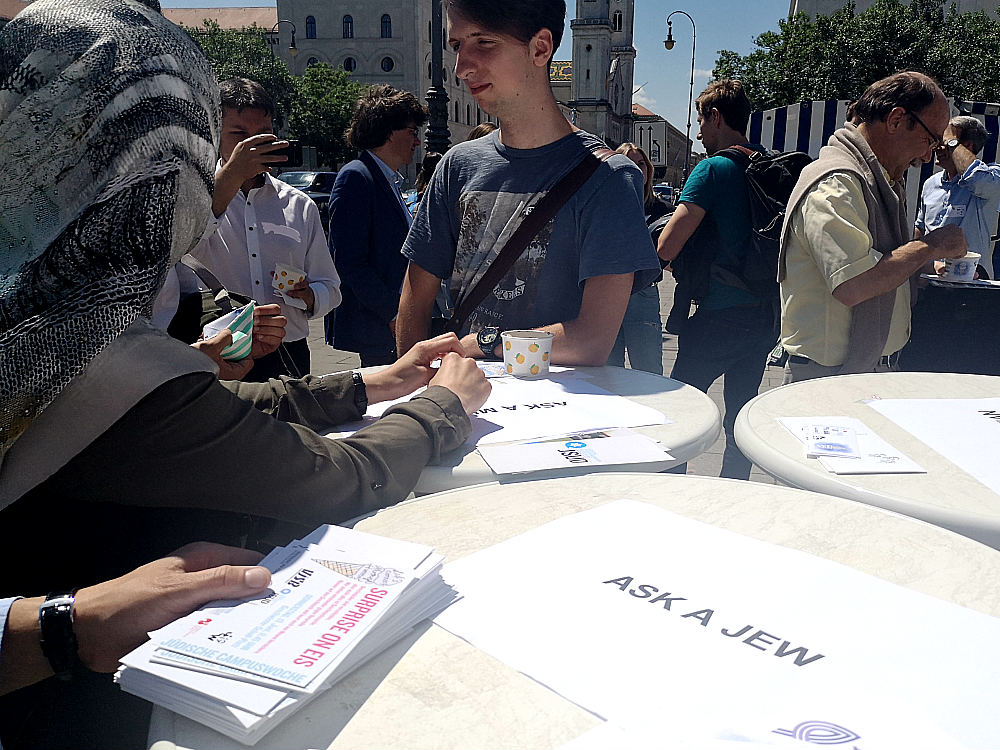 Their enthusiasm was overwhelming. Interaction at a personal level matters. How much do we know about being Jewish? Have you asked yourself: “Do you have a Jewish friend?”

As we see a deeply worrying rise of far-right groups in Europe and in antisemitic attacks in cities, initiatives like Swartzberg’s are needed more than ever to counter anti-Semitism.

Demonstrating against far-right groups is imperative but a spirit of mutual respect on a personal level fosters social cohesion. It weaves a powerful network rooting out the causes of hate and counter anti-Semitism.

An initiative at a bookstore in Berlin is based on that same spirit. Culture has energized a collective force with the civil courage to face up to the far right in their neighbourhood.

We dare not give into hate and fear. Anti-Semitism feeds itself from the vacuum left by the loss of interaction, insecurity and resentment among diverse communities.

We are all neighbours. And those who are victims in the past were our neighbours as well. And as Swartzberg puts it, ‘Jewish life in Munich is vibrant and multifaceted. And that is an achievement to be celebrated and protected.’