Last week a major international TV network treated viewers with ‘30 seconds of calm’ during commercials on prime time. The Covid-19 pandemic has emptied our streets but has also slowed down the world. Gradually cities will open up again to citizens after two months of quarantine or more. Would urban dwellers search for tranquil open spaces in cities due to new acquired routines to feel calm and relaxed and boost their health?

In London the grassroots urban initiative Tranquil City has been a pioneer at enabling urban calm in cities to promote healthier lifestyles long before the outbreak of the pandemic. ‘Cities are incredible but they can also be intense. Sometimes we all need a place to slow down, notice our surroundings and take a moment for ourselves’ reads Tranquil City philosophy.

Grant Waters, founder of Tranquil City, is a real expert in finding and defining tranquility. If you live in a busy city, discovering tranquillity in your daily life can be a challenge. As an acoustic engineer he has studied how sound is experienced in the context of cities and how it affects health and wellbeing. Many scientific studies have proved that tranquility and low levels of stress are good for our health.

After finishing University, Waters started working in the city with the amount of pressure that comes with it. ‘You have to keep up with the fast pace of a city like London’, he claims. ‘After years working with that pressure I was exhausted and took some time off. I realised how important it was to take a break. I find myself gravitating towards those tranquil spaces in London, which gave me some kind of relief’.

During this time Waters started challenging preconceptions of cities. ‘We shouldn’t have to go to the countryside for calm and wellbeing. We deserve it in the city too’ explains Waters. Unsettled by the idea that those tranquil spaces wouldn’t be embraced without the speed our cities are coping with, he organized a network of people to explore citizen’s relationship with tranquility in the built environment to promote health, wellbeing and balance.

It was a kind of protest. Let’s not keep with that fast pace of the city, claims Waters.

They all agreed that by better promoting the concept of tranquillity in urban areas, humans can create cities that better respond to the often-forgotten need for respite from stress, congestion and pollution, providing an escape without the need to leave the city.

Public participation and crowdsourcing to make sense of smart cities

By mid-2016 they began a crowdsourcing campaign, with the open question, “where do you find tranquillity in London?”. This experiment led to the current Tranquil Pavement London map, which locates a high amount of tranquil spaces including simplified city-wide datasets, such as noise and air pollution. If Londoners want to contribute, the only requirements are to post a photo or video to Instagram or Twitter, along with a gps location, and to include the hashtag #tranquilcitylondon.

But ‘what is tranquillity?’ Is it tranquility exclusively related to low levels of noise, pollution and to green areas? Waters, together with his multidisciplinary team in environmental science, built environment, psychology, data science and public engagement, run workshops and events across London to find an answer to that question.

How can applications grasp data more related to citizens, specially for those who advocate for smart cities but don’t want to miss the people?

Urban safety platforms like BCN_Helpers in Barcelona or Safetipin in New Delhi gather information through crowdsourcing as well. People share their personal experiences in social media for the benefit of all citizens. When the #tranquilcitylondon posts are analyzed, there is certainly a degree of the ‘relative’ at play in the perception of tranquillity. Each citizen has their own preferences and areas.

It is hard for urban developers or any professionals involved with cities to work with subjective data. However, we can’t just simply ignore it because we don’t understand it. In fact the concept of smart cities doesn’t work if it is not routed on people and subjectivity.

The National Planning Policy Framework (NPPF) states that planners should ‘identify and protect tranquil areas which have remained relatively undisturbed by noise and are prized for their recreational and amenity value for this reason’.

‘However, no one has been able to really define what tranquil means. What we all realize is that we don’t want it to be entirely subjective because we identify factors such as green areas, water, trees, etc. which potentially make open spaces tranquil in cities. In the other hand, we don’t want to be an authority on tranquility either. People should bring in their own valuable interpretation’, explains Waters.

Since people’s tranquil spaces are not just cold data sets, some people could think of them as secret spaces and could be reluctant to share them with others to avoid crowds ruining them all together. But what may be tranquil and special for a citizen, can feel very different to somebody else. Tranquil open spaces in cities are not about secrecy but rather finding a place where you feel comfortable and trust others, who want to feel the same way.

If an application like the Tranquil Pavement London map would encourage people to have the confidence to share their tranquil spaces, other Londoners would have the opportunity to relax in those places. Tranquil City’s main approach is to change people’s behaviour to promote healthier urban lifestyles for all in the city.

‘It could take many years to change infrastructure and the built environment to support the wellbeing of people. But citizen’s behaviour can even change immediately. The quarantine due to Covid-19 has proved that to the extreme’ explains Waters. 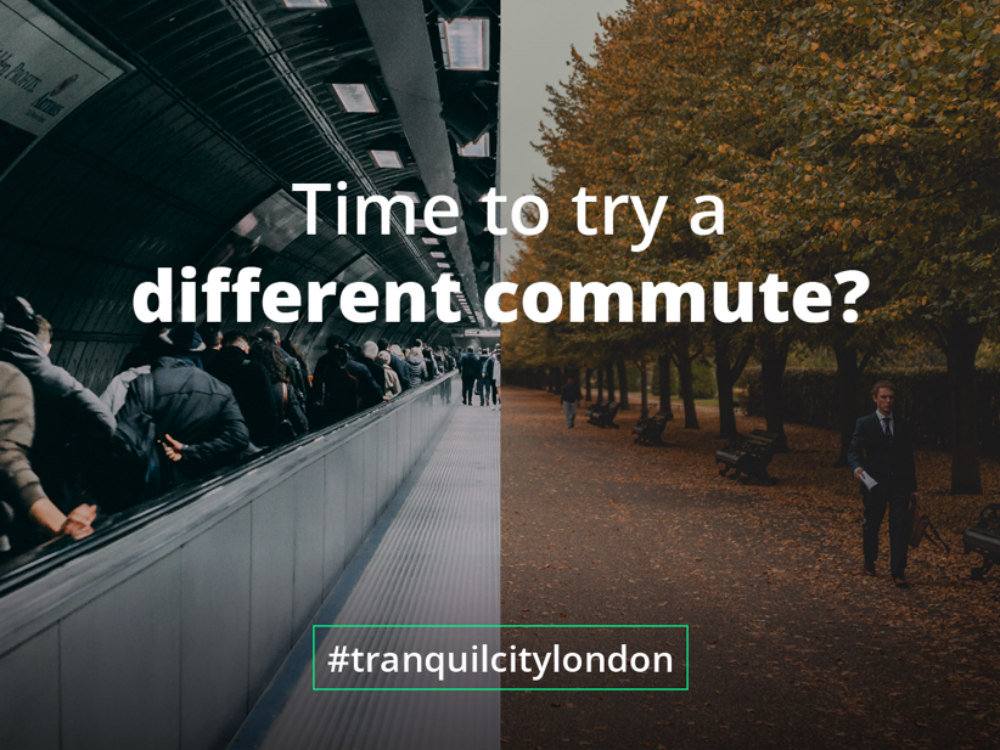 ‘Currently we are focussing on integrating our data into large scale apps, so that we can reach more people. Apps and digital services, which citizens use every day, can encourage citizens to spend more time in healthier urban spaces and less time in poorer quality ones, such as routing apps helping them to take ‘tranquil routes’ instead of just the quickest’, says Waters.

If filmmaker David Lynch is right about people around the world who will emerge from their quarantines ‘more spiritual’ and ‘much kinder’, when the city feels unsettling again, some people could be overwhelmed. Experiencing tranquil spaces can support this need amid stressful urban living.

Certainly it is hard to sit in a park and do nothing. It is a skill to learn to recognize that you need your space and be by yourself at an open public space without feeling weird. Now it is a good moment to start a conversation about the importance of tranquility in cities. Some citizens, like health workers, will have to deal with the post-traumatic consequences of the pandemic. Rest and recuperation are fundamental to peace of mind.

‘We are living in unprecedented times and to document how things have changed, we can use environment psychology. It can document and measure how people adjust to the city again after the lockdown. For instance, we could analyze if more citizens keep working from home more often or if they maintain some healthy behaviours acquired during the pandemic’.

At the end of our conversation in an attempt to cheer things up, I told Grant Waters, we urban dwellers will survive this difficult time. Waters responded, let’s do more than survive, let’s thrive!